Dimapur Press Club (DPC) in association with the Guwahati based Dispur Hospitals has organized another Hepatitis-B vaccination camp for the scribes who had taken the first dose of vaccine on July 21 last at the Press Point, Dimapur. The second (and final) dose of Hepatitis-B vaccination will be administrated on Friday (August 21) at the same venue, which is mandatory to complete the vaccination process. Led by DPC president Moa Longkumer, secretary Pandi Renta and treasurer Dilip Sharma, the first vaccination camp covered more than 30 Dimapur based journalists and some officials from Dimapur district public relation office of Nagaland.

Before the camp, Tir Yimyim editor Temjen expressed gratitude to the medical team arriving from Guwahati for their kind gesture towards the fourth estate of democracy, which he described as the most important segment in the society. He also congratulated DPC for organizing such noble programme for the welfare of its members.

26 Feb 2014 - 8:48am | AT News
Tezpur seems to have dressed afresh to receive Rahul Gandhi on Wednesday. An elaborate security is in place in the beautiful town to ensure peace during the visit.The AICC vice president is scheduled... 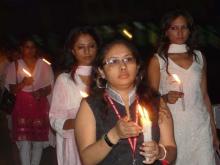