Talking to reporters in New Delhi on Sunday after he met BJP president Amit Shah, Dr Sarma said that BJP will be forming the next government in Dispur.

He said that Congress will be taking the decision on his disqualification and by election.

He said that the party will convene a huge rally in Guwahati where he will be joining along with at least 7 MLAs and supporters.

17 Jan 2008 - 3:20pm | editor
Some startling revelations have come up before the Justice Manisena Commission on Thursday while it was hearing the November 24 Beltola incident. Special superintendent of police in charge of the...

AGP grassroot workers not happy with poll deal with BJP

30 Mar 2009 - 1:59am | editor
The grassroot level AGP workers are not comfortable in the poll alliance with BJP. This was on display as the party was holding its general House meeting in Guwahati on Sunday.Several leaders in the... 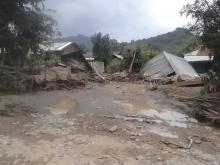 Flood of woes in Manipur

7 Aug 2015 - 7:06pm | AT News
Many parts of Manipur are still reeling under waters bringing brimful misery for lakhs of people in the north eastern state.The water level is receding marginally. But the level of woes has been...