Arunachal Pradesh governor JP Rajkhowa on Thursday hoped that the Gandhi jayanti celebrations would strengthen the spirit of unity among all the people across the globe and promote universal peace and tolerance.

In his message on the occasion, he said that Gandhi is the embodiment of peace and non-violence. Gandhi’s path of non violence and his commitment to democracy and humanity are universal and are revered throughout the world.

Give Ranjan we will give you peace: NDFB

5 Nov 2011 - 1:54pm | editor
NDFB on Friday makes it clear that the peace initiative with the government won’t proceed unless and until chairman Ranjan Daimary is released immediately. Addressing a press conference... 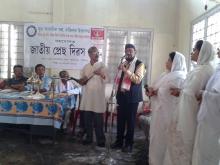 16 Mar 2015 - 12:00am | SK Hasan
In a bid to make the people aware o H1N1 infection, Pragati and Freelance Journalist Association organised a day long awareness programme in Nazira on Sunday.Participating in the programme Dr Lobodev...