Amid report of the huge megadam over the Brahmaputra by China, chief minister Tarun Gogoi on Wednesday took on Prime Minister Narendra Modi alleging his silence. In is twit Gooi said,"PM's much vaunted Act East policy should act when it matters the most to NE lilke desisting China from operationalising dam on d Brahmaputra— Tarun Gogoi (@tarun_gogoi) October 14, 2015."

10 Jul 2011 - 10:16pm | editor
KMSS leader Akhil Gogoi on Sunday blamed it all on the Gogoi government for the recent Dispur clash that killed three persons including a minor boy on June 22. Addressing a press conference at the...

Narrow escape from explosion in Guwahati

2 May 2018 - 5:05pm | AT News
GUWAHATI: After a brief spell, Guwahati had a narrow escape from a devastating explosion when security forces seized a powerful bomb from a bus in the city. Acting on a tip off, the security forces... 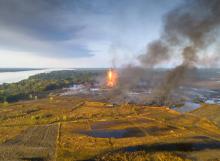 10 Jun 2020 - 10:26pm | AT News
TINSUKIA: Two fire fighters died as they were trying to douse a huge inferno at a gas well in Tinsukia district on Tuesday even as the fury continues to spread out of control sending statewide shock...