The NC Hills Aautonomous Council Employees Union has suspended their strike on Monday. President Prasana Hasnu stated that they had a meeting with the new CEM Niranjan Hojai who promised to clear their dues. 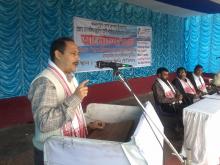 15 Feb 2014 - 10:53am | Bikash Das
2nd death anniversary of journalist Muslim Ali Saikia was observed by Kamalpur Press Club on February 14 last at Kamalpur Mini Stadium at Kamalpur in Kamrup district. On the ocassion the flag of the...