The parishad on Sunday organized an awareness meeting at Baruapara LP school ground in Kokrajhar with Sheik Selim Patgiri, president of the Kokrajhar district committee in the chair. The meeting thoroughly discussed on the various issues and aspects of the community which included keep alive of community identity and safe of rights.

Patgiri, in his speech said that the Goria Maria community in the state is the indigenous community with their own identity and tradition that has been giving status among society. He has urged the the community should be included into NRC update without any hesitation with Goria Maria identify, include the community into population census, giving of 5% reservation seating Bodoland University, CIT, Bineswar Brahma Engineering College to the student and peoples of the community, besides appointing a member fro  the community.

' The community should be given good facilities in all fronts of the society that is why creation of satellite autonomous council is required immediately in the state', Patgiri added.

Matinur Rahman, secretary of the parishad, members were present.

Shoot out near Sivasagar police station

17 Mar 2020 - 9:24pm | AT News
Guwahati: Journalists’ Forum Assam (JFA) has expressed concern that Digjyoti Lahkar, a young and energetic journalist who has garnered considerable experience over the years by serving in several... 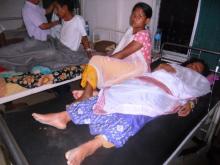