Getting a tiptop information about presence of militant cadres in the area, a joint team of police and army launched a operation and apprehended hard core cadre of NDFB-S and link man from Bamungaon area late last evening.

The cadre was identified as W Gol@ Gangaraj Wary and linkman was Kalicharan Brahma.

Wary joined the militant outfit in 2012, was trained in Myanmar. He was involved with Adivashi carnage at Koraibari in December 2014.

A pistol, riffle, Chinese grenade, 41 ammunitions were recovered from them. 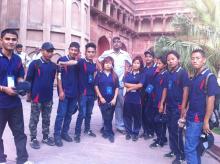 29 Apr 2015 - 7:02pm | Hantigiri Narzary
The study tour of the students from border areas from Kokrajhar and Chirang district visited historical places and educational institutions in Delhi and Agra under sponsorship of 16th Battalion(Bn)...

26 May 2017 - 1:41pm | AT News
Prime  Minister Narendra Modi opened the country's longest ever Dhola -Sadiya bridge over the river Brahmaputra naming it after Bhupen Hazarika during his day long visit to the state on Friday...