Students activists from All BTC Bengali Youth Students Federation show their protest and burnt effigy of Chief Minister Tarun Gogoi in protest against his recent derogatory remakrs on Hindu Bengali community in the state.

The Salakkati anchalik committee of students federation shouted slogans against Gogoi and burnt his effigy along the Salkati bazar road in Kokrajhar today and demanded eraly apolozize to the remarks. The students federation also burnt Gogoi’s effigy at Gossaigaon in the district and strongly condemned remarks carried out from Gogoi on Hindu Bengali.

22 Apr 2015 - 2:34pm | AT News
ln a major embaressment for BJP a year ahead of assembly a local court in Nagaon has ordered life sentence for a leader convicting in a murder case. The additional district sessions court in... 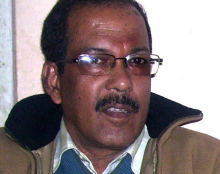 13 Feb 2011 - 7:08pm | Abdul Gani
Digital film making is the only way to save the regional cinema. This is what the filmmakers and experts believe. In an open forum discussion organized by Cineasa as a part of the recently concluded...

22 Mar 2014 - 9:04pm | AT News
Yet another AAP candidate won’t be able to contest in the upcoming Lok Sabha poll.Tezpur returning officer has rejected the nomination papers of Aam Admi Party candidate during the scrutiny on...