Condemning against the brutal killing of two scribes in Bihar and Jharkhand this week and demanding justice for the victim families, a protest demonstration has been organized in front of Guwahati Press Club tomorrow (Monday) at 2.30 pm.

The demonstrators will also raise voices for a special protection law for the working journalists across the country and call upon the Union government in New Delhi to formulate a national action plan to safeguard the media persons who pursue critical journalism.

It may be mentioned that the murder of Akhilesh Pratap Singh (35, worked for a Jharkhand television news channel) and Rajdeo Ranjan (45, worked with Hindustan from Siwan locality of Bihar) generated massive protests across India. Simultaneously, the demand for the special protection law for the media persons on duty is also mounting. Even the Press Council of India’s chairman Justice (retd) Chandramouli Kumar Prasad has also condemned the killings and urged the Centre to enact a special law for protection of journalists and speedy trial of cases of attacks & assaults on them.

Earlier various national and international media rights organizations and also members of prestigious press clubs based in New Delhi, Mumbai, Kolkata etc have demonstrated their angers against the vicious attacks on the media persons eliminating three journalists this year in the country, where as the robust media fraternity of India lost five journalists to assailants last year.

Various media forums based in northeast India may also decide to organize similar protest demonstrations tomorrow in respective locations to show their solidarity for the cause.

20 Jan 2013 - 8:55pm | AT News
Once again BJP brings serious charges against Congress. Te opposition party on Saturday accused the ruling party of siphoning off huge amount of money allotted for development projects under the '... 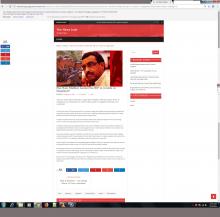 12 Feb 2018 - 8:22am | AT News
KOHIMA: Nagaland BJP has stepped up action against TheNewsJoint.com, after lesser known news portal broke out a story alleging Ram Madhav's stay at hotel in Dimapur with two girls. Issuing a...

28 May 2012 - 2:48am | editor
Police have arrested Borkhola MLA Rumi Nath and his facebook friend turned second husband Jackey Zakir on Sunday a few days after her first husband filed an FIR at a local police station. Nath,...