With banners and festoons hundreds of protesters blocked the rails in Sivasagar, Dibrugarh, Margherita, Digboi, Jorhat and Golaghat raising slogans asking the Centre not to proceed with the deal.

The protesters further asked the Centre to roll back the move within 24 hours.

16 Jul 2014 - 9:06am | AT News
Decks are clear to update the National Register of Citizens. The centre has already approved the revised modalities for updating the NRC including the names of persons from the electoral rolls...

16 Jan 2009 - 3:16pm | editor
The Supreme Court on Thursday has asked the government to submit a status report on the Bangladeshi immigration and stressed national identity cards for all citizens of the country to resolve the... 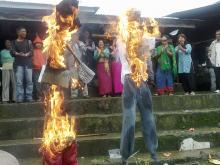 31 Aug 2015 - 4:08pm | AT News
Protestor at Tamenglong district have burnt effigies of Manipur Chief Minister and Deputy Chief Minister during the 12-hour band called by three tribal students' organisations in the hills districts...