With an aim for initiating professional excellence, raising voices for social-financial security to scribes and finally developing a comprehensive platform for the working journalists of northeast India, a new organization named North East Union of Working Journalists (NEUWJ) has been mooted.

A provisional committee was recently formed in a meeting held at Guwahati Press Club which decided to organize a convention in the city to formalize the process of its formation and start functioning after due expansion in the meeting. 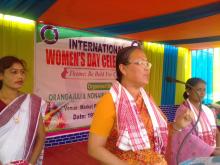 19 Mar 2017 - 10:12pm | Robertson Tanti
On the occasion of International Women’s Day held on Sunday at Orengajuli tea garden, the Deputy Commissioner of Udalguri district urged the tea women workers to come together to eradicate the curse...

Longchiui - yet to see the light of development.

5 Dec 2010 - 3:57pm | Anup Biswas
Longchiui, a village only 3 Km away from the Umrangso, the only industrial township of Dima Hasao is yet to see the light of development. The village was established by the affected people of Kopili...

2 Dec 2007 - 4:00am | editor
Assam Day, also known as the Syukapha Day, is being observed on Sunday with a series of programmes across the state.Assam Chief Minister Tarun Gogoi is schedule give away the Sukapha Award to noted...