A simmering internal feud triggered a shoot out at a religious function in Guwahati where one person died on Sunday.

The sensational shoot out took place in the bread day light at a Shikh temple in Beltola where a person sprayed several rounds of bullets on a fellow from a point blank range.

Harbinger, who sustained serious injury was rushed to GNRC where he was declared brought dead. On the other, minutes after the shoot out, Basistha police came and held Lakhbinder from his residence. Interrogation is going on.

The reason is said to be personal feud between the two. 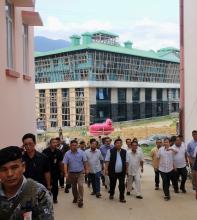 76% turn out in Kokrajhar

24 Apr 2014 - 7:50pm | Hantigiri Narzary
The parliamentary election for No. 5 Kokrajhar Lok Sabha was concluded with poll related violence at Harbanga under Tulsibil police outpost and recorded with 76.22 percent vote  by 5 pm on...

Historical Drama “ Bagh Hazarika” will be staged at Nazira

10 Feb 2012 - 5:53pm | editor
The “Ramdhenu” group of Hahsora-Sivasagar will staged the historical drama, “Bagh Hazarika” based on Saraighat war on 11 February at Nazira Natya Mandir. The drama is written...