In the series of medical camps,Army camp Borongajuli of Red Horns Division under Gajraj Corps conducted a medical camp at Gariajhar village in Udalguri district on August 30.The medical camp was inaugurated by DN Hazarika, ADC, Udalguri cum SDO (civil) I/C, Bhergaon sub-division.Four medical officers including one dental surgeon from Red Horns Division provided medical check up for the people of the remote Indo-Bhutan border villages.Three specialists along with two nursing staff from Udalguri Civil Hospital also attended the patients mostly children and woman.Free medical check up and distribution of medicines were carried out for 1250 numbers of patients.Special check up was also conducted for the students of nearby schools and 430 numbers of students were benefited. The students were also briefed on the procedure of joining the Armed Forces and way of Army life.Interactive session with students was also organized on the occasion to motivate students to perceive Army as a profession and a career.Cultural programme was also arranged with the Army band. Col. Durgesh Kumar Bansal, Commanding Officer, 14 Dogra Regiment also attended the camp.

6 Jan 2020 - 5:29pm | AT News
The Asom Nagarik Samaj has condemned the JNU mob attack happened on Sunday night which sent shock waves across the country. Demanding independent inquiry into the horrific incident the outfit said... 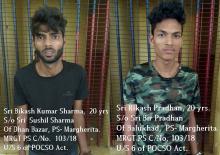 9 Sep 2017 - 9:29am | Akshaya Pranab Kalita
After much hue and cry in thr entire Dibrugarh district, the Namrup police have captured a local youth on Friday a week after he tried to molest a college girl who was on her way back to the home....