The Dispur Hospital conducted the weekly evening OPD clinic at Guwahati Press Club on Saturday (2 September), where Dr Raj Dutta (medicine) offered free consultations to the participants. Organized under the series of ‘Evening with a Doctor’ programs, the camp witnessed the participation of more than 30 media persons along with their family members, where they also got their blood pressure & sugar checked by hospital workers namely Parismita Gogoi and Jitu Pathak.

A physiotherapy camp is scheduled for 8 September (1 pm to 5 pm) at press club premises, whereas the next Saturday (9 September, 4 pm to 6 pm) clinic will be arranged by Hayat Hospital. Another camp on 15 September (3 pm to 4.30 pm) will be graced by SIMS Chennai Hospital’s orthosurgeon Dr Appaji Krishnan.

26 Jul 2008 - 4:34pm | Ritupallab Saikia
Anurag Rajkumar, a H.S. Second year student of D.R. College, Golaghat, was found dead under suspicious condition at a hotel room at Dimapur in Nagaland. According to the sources, Anurag who studied... 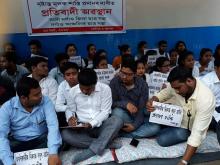 24 Mar 2018 - 9:35am | Dibya J Borthakur
NAGAON:Shock and anger grip Assam a day after three miscreants gangraped a minor girl to be burnt alive later in Nagaon district forcing the people in many places to hit the streets demanding capital...