Dr. Tulshi Prasad Saikia described the objectives of the meeting and Dr. P. K. Das explained the motive behind opening up of the centre. Dr. D.K Borah gave the guest lecture and inspired the students and farmers on how to improve their agricultural systems. The programme was hosted by Miss Manisha Barman and Gouranga Chetia(students).  Students performed a chorus and addressing speech was given by agri student Jyotiprasanta sharma.

The meeting witnessed huge mass gathering and warm appreciation from the local people. The Information Centre was designed with a view to serve people various needs of the farming community of the area so that they can be made aware of the new improved technologies which they can use to improve their present farming practices.

The Information centre  comprised of various agricultural models, crop disease charts, equipments and all sorts of information for the farmers. Thus, the effort of the students received mass appreciation from the farmers and the students promised to promote more information among all farmers at grassroots level in future too so that the farmers of the locality can earn huge profits with improved technologies learnt. 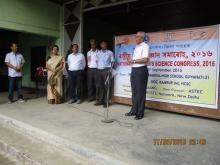 8 Nov 2017 - 7:43pm | AT Kokrajhar Bureau
Security forces in Kokrajhar claimed to have apprehended yet another NDFB-S rebel along with an over ground worker (OGW) at Dwimuguri village under Panbari police outpost in Chirang district early...