In an effort to uplift the border populace 37 Battalion SSB deployed at Indo-Bhutan Border distributed furniture and computers to three different schools. SSB also gave a face lift to these schools by renovating the existing infrastructure by construction of brick wall and flooring. This was stated in a press statement from the office of 37 Bn SSB,Mangaldai.. A concluding day programme was also held on Sunday where the Panery MLA Kamali Basumatari appreciated the efforts of SSB and said that because of the presence of SSB the security scenario of the area has improved. DIG SSB A.K. Mallik also addressed the students and villagers on the occasion and exhorted the public to emphasis on the education of the students and cleanliness.Commandant 37 Bn Sh Rohitashwa assured the public that efforts being done by SSB will continue in future also.SSB also organised a medical and veterinary civic action (MCA/VCA) programme at Navajyoti M.E. School, Nalapara of Udalguri. 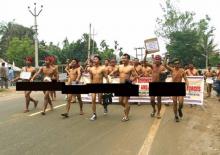 21 Apr 2017 - 4:49pm | AT News
In a bizarre show of shock and anger hundreds of Karbi youths representing 24 organization staged an unprecedented naked protest alleging lack of response to the demands they gave been raising for...

24 Oct 2010 - 6:33pm | editor
There is report of simmering tension at Rongia in the outskirt of Guwahati a day after 3 killed and several others injured in police firing at a group clash on Friday. According to information, the...