A hog deer was rescued after it slipped into a pond at Koklabari agriculture farm in Baksa district of BTAD on Sunday.
The animal  was spotted by the villagers at a pond which is felt on pond clay and saw injuries on its one leg.
Following information about Hog Deer's fall to the pond clay, a joint team of Manas Maozigendri Ecotourism Society,a NGO and forest department rushed the spot and rescued the Deer from Koklabari agriculture farm, outside of Manas National Park.

8 Apr 2011 - 2:07pm | Juthika Das
As the 13th Assam Assembly Election is nearing, all the political parties have been migrated the high profile leaders to the remote areas made the election scenario of Barpeta also warm.The wave of... 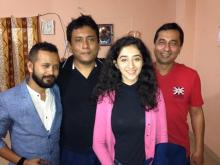 21 Nov 2015 - 7:33pm | Prantik Deka
A new short film has been made as a tribute to cultural activist and cinema producer late Daisy Gogoi. The film made in Hindi titled 'Yatra', produced by Bikramaditya Gogoi, brother of Daisy Gogoi,...