China expected to be the most developed Nation by 2020

China is expected to head the list of the developed nation of world by 2020 if the country follows continues to perform and develop in the expected lines as seen today. This is the observation made by Dr. Kulendu Pathak while speaking at the academic journal release program published by Research and Development Publication of Education, Research and Development Foundation (ERDF) here at Guwahati Press Club today. Dr. Pathak said his observations are based on his studies during his recent visit to China. He asked the enthusiastic young and dynamic upcoming journalists of Assam and trainee journalists of Central IT College to study China and imbibe the thought process of the activities of the neighboring nation. He mainly focused on the education development sector which is the most instrumental factor and necessity for a nation to be developed which has been by far neglected in the state. He emphasized on privatization of education sector to cope up the speedy education revolution across the globe.

Haider Hussain editor of the Asomiya Pratidin also outlined the contribution of ERDF which has by contributed for the cause of society by establishing and imparting professional quality education namely Central IT College a professional institute under Sikkim Manipal University (SMU), Regional College of Higher Education under North Eastern Hills University (NEHU) that provides courses on Bio-Chemistry and Bio-Technology also a Central Public School affiliated to Central Board of Secondary Education (CBSE) at Karimganj under the leadership of M Hoque the chairman. He appreciated ERDF's venture to stop outsourcing of state's wealth and youth both in the name of education and employment by preparing the students to the take up the challenging opportunity of the state. Mr. Houque in formed the foundation laying stone of the 4th venture of Regional College of Science and Technology(RIST) at Ri Bhoi district in Meghalaya was graced by Donkupar Roy chief minister of Meghalaya.

Research and Development Publication of Education Research and Development Foundation(ERDF) today launched its academic journal based on bio technology "Bio-Science", "Abacus" and a news letter on ERDF apart from this they also publiush Invent Update a magazine on timely update of the activities of ERDF and a journal The Image published by the Mass Communication and Journalism Deptt of Central IT College. Namrata Sharma PRO ERDF gave a brief outline at the inaugural session. Mr. Hoque appealed his competitors to compete him in setting up better infrastructure and promote quality education, which is the backbone of country's development. He expressed his disappointment on the administration for not allotting land piece for establishing a engineering college in Guwahati for reasons best known to them. By far Mr. Hoque have been conferred awards and felicitated publicly in various parts of the state for his endeavor. S D Phukan Principal RCHE, Chayanika Goswami lecturer Deptt of JMC were also present in the meeting besides a host of friends, students and relatives of ERDF. Former consulting editor of The Sentinel Nurul Islam Lahakar also spoke on the occasion as a part of ERDF. 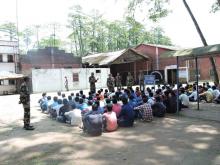 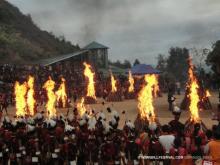 30 Oct 2017 - 5:58pm | AT News Dimapur
Nagaland is gearing up for Hornbill Festival which is just a month away. Chief Minister TR Zeliang presided over  a meeting in Kohima on Monday to discuss and improvise the...

5 Jul 2010 - 10:44pm | Jayanta Kumar Das
The mysterious death of another male wild elephant calf in Udalguri district has drawn sharp criticism from the nature loving people of the district. This has been the case of fourth death in a...