Along with the other parts of the country Christmas was celebrated with gaiety and religious fervour in the town, with midnight mass ringing in the festivities to mark the birth of Jesus Christ. Churches of the town wore a festive look as the faithful flocked the Baptist church and Don Bosco,Tangla Catholic church for midnight mass.

People of other religions also joined the mass and celebrations on Monday morning.

Carols were being sung, gifts exchanged among thec hildrens as well as scenes of the birth of Christ were enacted by faithfuls at the churches.

Special Christmas prayers were held in the church on Monday morning which were led by Rector Fr. Marcus Lakra,followed by musical programmes.

A seizable number  of people of Christian faith as well other faith took part in the morning prayers in the cathedrals.

The church witnessed  visitors throughout the day. The town as a whole was gripped in the Yuletide spirit with colourful decorations and Christmas carols.Don Bosco Church was the main centre of Christmas celebration for the Catholic people. People lighted candles and incense sticks in the Church premises and offered prayers.Visitors of different faiths kept admiring the colourful

decorations and decorative lighting works in the church premises. 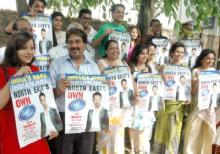 2 Sep 2007 - 3:54pm | pbaruah
Guwahati: Indian Idol finalist Amit Paul is arriving in the cirty on Monday seeking more support that could help him to steal the show. According to information, Paul is all set to call on Zubin...

25 Jun 2009 - 8:31am | Bikash Das
An ULFA militant namely Ritul Sarma (25) was apprehended today at Haripur village under Kamalpur PS of Kamrup district by Kamrup Police, Troops of Red Horns Division of the Indian Army and CRPF.The...

29 Jun 2010 - 7:57pm | editor
Amid a simmering debate over involvement of several ministers in the multi crore scam in NC Hills district, the Assam government is in a process to reopen the letter of credit scam in the animal...
Follow @Assam Times