Tension is still simmering in five districts of lower Assam even as the Centre has dispatched 1,400 para-military force personnel to contain the situation where more than 60 people were killed in communal clashes.

According to sources, these forces have been rushed to the worst hit Udalguri and Darrang districts. In an effort to restore peace in the area, 16 columns of Army have also been deployed to assist the local authorities. The army personnel staged flag march in the area to instill confidence among the people.
Over one lakh people from the affected areas have been sheltered in relief camps in Udalguri and Darrang districts.

The Centre is in constant touch with senior officials of Assam government and was himself monitoring the situation closely. The Union home ministry has further asked the state government to deploy adequate forces in the neighbouring districts.

Bodo villagers are unfurling Indian flags in their villages marking it as ''Indian territory'' as the other group had not only shouted pro-Pakistan slogans but also hoisted Pakistani flag, a fact confirmed by villagers of Bakhal para as well as the army jawans who were posted in and around Bhakatpurarea.

Talking to reporters Mr Jiten Bodo of Bakhalpra, a school teacher said, “they hoisted the Pakistani flag behind my land after burning three of my houses completely.''
Another section of local residents have alleged that most of the Bangladeshi immigrants have set on fire their own houses to blame the Bodos and other indigenous people and that with this allegation they have been managing to get government relief materials in the refugee camps. 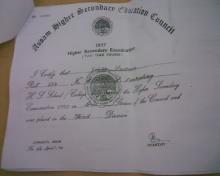 Fake Certificate for use in Assam

25 Aug 2009 - 2:59pm | editor
Will you believe that, the prestigious Board of Secondary Education, Assam and Assam High Secondary Education Council can issue fake certificates? Here are two examples, where it shows that both the...

BJP takes out protest in Golaghat