TANGLA: Nearly two thousand disciples of Thakur Anukulchandra from various parts of the state thronged Satsang Vihar in Tangla on Sunday to mark the 31st Foundation Day.
Apart from religious songs and prayers throughout the day, a discussion on Thakur’s philosophy and universal peace was also held on the occasion.

Retired Principal of V.B.P High School,Kopati, Pradip Malakar presided over the function flanked by Dr. N.C Mitra who delivered sermon on the ocassion.

“Satsang Vihar is a movement that promotes amity and tolerance among people, irrespective of their religious affiliations. Thakur's philosophy on the values of humanity is extremely relevant in today's world," Pradip Malakar said.
The Tangla Satsang Vihar was inaugurated by Acharya Dev Sri Sri Dada way back in March 1987.

very good attempt to focus on

Permalink Submitted by Sashi Kalita on Sun, 25/02/2018 - 21:15
very good attempt to focus on the ideology of Sri Sri Thakur by our beloved Shajid. May HIS blessings nourish our thirsty mind.

18 Oct 2012 - 7:29pm | editor
One more rhino was found dead in Kaziranga on Thursday. KNP officials called it a case of natural death. Its horn was recovered by the park authorities in Bagori range. In yet another incident, a...

21 Jun 2014 - 8:12pm | Rajiv Roy
Nothing works in Meghalaya more than owning a land. And in this land, which is traditionally owned by the tribals – they can do whatever they like. And the way things are moving here the day is not... 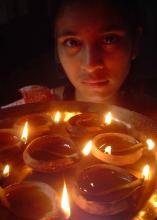 9 Nov 2007 - 8:53am | pbaruah
Assam also observes Dewali, the festival of light across the state. Rows and rows of earthern lamps, sounds of fire crackers speak all what the celebration everywhere.Despite some restrictions to...