Guwahati: The second edition of Guwahati Film Festival began at Jyoti Chitraban premises in the city on 2 March 2018, where over 77 film works are scheduled for screening for the film appreciators. Organized by Chalachitram, the three-day festival will also incorporate movie related discussions and award ceremonies.

There will be a special screening of Ananda Ram Baruah (produced by ABILAC and directed by Amalesh Dasgupta & Dr Swapan Saha) and homage to be paid to five decades of Dr Bezbaruah (directed by Brajen Baruah). The curtain will be down on Sunday where State cultural minister Naba Doley and actor turned legislator Angoorlata Deka are expected to attend the closing ceremony.

5 Apr 2010 - 2:41am | Jayanta Kumar Das
Congress government in Assam has realised the big mistake of patronising Hagrama Mahilari led BPF government in BTAD areas for which they had to sacrifice a lot during last five years in so many... 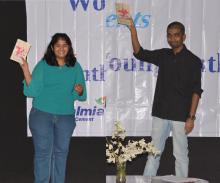 Children launch book of fiction for a change

28 Sep 2015 - 9:35am | Syed Miraz Ahmed
Guwahati, growing by leaps and bounds in every sphere is home to a number of acclaimed writers. In fact some of the finest and decorated writers India can boast of are from the North East leaving no...