Led by state Congress president and Rajya Sabha MP Ripun Bora, the MPs stood in front of the Mahatma Gandhi statute at the Sansad Bhawan premises in the morning where they raised voice of protest against the move.

They said the Sonowal government in Assam has been trying to downgrade the varsity to a technical institute much to the utter disappointment of hundreds of girl students who have been pursuing various courses there.

They asked the Centre not to disrupt the varsity’s status and immediate measures to uplift it. Lok Sabha MPs Gaurav Gogoi and Sushmita Dev also participated in the protest. 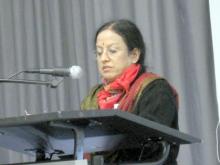 21 Oct 2010 - 1:12pm | editor
On the occasion of the 150th anniversary of the great Philosopher Arthur Schopenhauer's death the international Schopenhauer Gesellschaft and the Schopenhauer Research Center at the University of...