The Opposition Congress staged protests in front of Meghdoot Bhawan in Guwahati, marking the day as ‘Biswashghatakata Diwas’ (betrayal day), against rise in prices of petrol, diesel, LPG cylinders and essential commodities on Wednesday.The protest programme attended by a number of party workers and leaders was held under the aegis of Guwahati City District Congress Committee. Former MP,Dijen Sarma; former state ministers,Sarat Barkataki,Akon Bora; APCC General Secretaries, Sailen Bora, Ranjan Bora addressed the protest programme, raising slogans against the BJP-led governments in the state and Centre. The programme anchored by President of Guwahati City District Committee,Kushal Kumar Sarma was attended by a large number of party activists and public.

The protesters condemned the Bharatiya Janata Party (BJP)-led Central Government for not being able to control the hike in essential commodities along with fuel prices across the country. The protestors had also sent separate memorandums to the Governor of Assam,Jagdish Mukhi and President,Ram Nath Kovind through the Office of Deputy Commissioner,Kamrup. 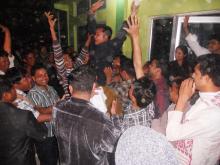 16 Nov 2013 - 3:54pm | Dibya J Borthakur
The recent publication of certain news about the financial irregularity at the Assam Agricultural University (AAU), Jorhat and charges of corruption levelled against some officials of the university...

17 Apr 2015 - 8:00am | AT News
A mild tremor rattled Guwahati and its adjoining areas triggering no less panic among the people on Friday. The tremor was felt at 3.30 in the morning which lasted for nearly 25 seconds forcing...