'The Dream Continues' was the theme of Snehalaya, an outreach programme of the Don Bosco Educational Society on completion of its eight years of service. Since its inception, Snehalaya has been extending its service to the poorest of the poor children in extreme difficult situation. Snehalaya, means a House of Love, was initiated by Fr Lukose Cheruvalel, SDB and became operational in January 2001. Since then it has grown in strength and size with five children's home, located in different parts of Guwahati city. Along with these institutional services, Snehalaya also has non-institutional programmes like two Contact centre in Guwahati Railway Station and Adabari bus station, non-formal school in Adabari, providing psychosocial support project in the juveniles home in Nagaon and Jorhat.

Now Snehalaya, Don Bosco has embarked on the advocacy of Child Rights and has collaborated with UNICEF in this regards to strengthen Child Rights in Assam, touching the lives of hundreds of children.

The Snehalaya Day is celebrated every year with much fun fair and gaiety. The Snehalaya Day 2009 marked the completion of eight years of service to the children in the city of Guwahati. The day was also marked by the inauguration of newly constructed building 'Savio Niwas', which is dedicated to children in extremely difficult situations, for their survival, development, protection and participation.

It may be mentioned; here that till now five Snehalaya Homes have been set up at strategic locations in the city. The Children's home at Dhirenpara was started at a little shed on January 1, 2001 with eight children picked up from the Guwahati Railway Station. At present it is a three storeyed RCC building and home about 75 children

Don Bosco Shelter Home at Pan Bazar for boys was opened on March 23, 2002. It is a drop in center for the boys, who are contacted from the railway station and from any part of the city. Now there are about 30 to 40 boys staying daily in this centre. Here they are served two full meals and some snacks. Apart from counseling children are also taught arts and crafts, given literacy and value education. The smaller children who can be educated are normally shifted to the Children's Home at Dhirenpara after counseling and motivating to study.

Auxilium Snehalaya at Noonmati for girls and small boys was inaugurated on January 31, 2003. The Salesian Sisters, under the leadership of Sr Alma, run this centre on behalf of Snehalaya. It is located close to the Oil Refinery at Noonmati and is home to 25 children. Some children have been reunited with their parents and family members.

Jyoti Snehalaya at Beltola for girls and small boys started on April 3, 2004. This home has 30 children mostly orphans. These children belong to age group of 3 to 15.This Home and children are taken care by the Missionary Sisters of Mary, Help of Christians, under the leadership of Sr. Patricia.

Ila Snehalaya at Betkuchi for destitute adults is a community care center for victims of HIV/AIDS and related diseases. This centre was donated to Snehalaya by Ila Trust, a charitable trust. Fatima Sisters run this centre under the leadership of Sr. Monica on behalf of Snehalaya. On an average it caters to15 indoor patients, mostly TB patients.

The Snehalaya Day programme began at Dhirenpara with a prayer dance by children of Jyoti Snehalaya followed by welcome speech by Fr Lukose, founder director and felicitation of guests. The children put up a heart touching dance drama titled the 'Dream Continues' based on the dream of Don Bosco.

15 Oct 2014 - 1:16pm | AT News
Noted intellectual and prolific writer Dr Hiren Gohain today asked the AGP leadership to go to the people to feel their pulse in the time of crisis. Opening the second session of the regional party's...

5 Apr 2018 - 12:48pm | AT News
GUWAHATI: Assam Congress legislators on Thursday staged protest in front of the state legislative assembly against the soaring prices of petrol and diesel across the country. Led by Opposition... 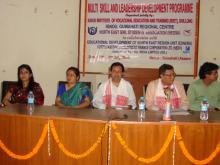 2 Aug 2009 - 10:52am | nabajit_dutta
The valedictory function of the three-week-long "Multi Skill and Leadership Development Programme" was held on July 31 at the State Museum Auditorium. Altogether 75 participants from various parts of...