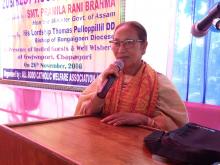 26 Nov 2016 - 8:49pm | AT Kokrajhar Bureau
Assam Forest minister Pramila Rani Brahma has announced compensation to the victims by man-elephants conflicts when she inaugurated the newly constructed Zubi Rest House at Gwjwnpuri Chapaguri by All...

Students to get more facilities at IDOL

8 Feb 2011 - 3:08am | Abdul Gani
With the ever rising demand of the students, Institute of Distance and Open Learning (IDOL), Guwahati, has several new facilities to cater the needs. The institute which was established in the...

26 Apr 2016 - 9:37pm | AT Kokrajhar Bureau
A person identified as Jahidul Islam was apprehended by security forces in a joint operation from Rupsi in Kokrajhar district on Tuesday. A 7.65 pistol,magazine and three live ammunition were...