A 9 mm pistol, along with 8 rounds of live ammunition, a 7.65 mm Chinese pistol, 5 rounds of live ammunitions were recovered from the rebels. The bodies have yet to be identified. The encounter took place during an operation was launched jointly by army and police. Before that two other NDFB cadres were killed at an encounter with police at Misamari in Biswanath Chariali in the same district on Thursday. It took place as they were on the way to extort money from a businessman. 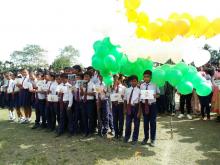 23 Jun 2016 - 9:10pm | AT Kokrajhar Bureau
Citizens from irrespective of caste, creed, languages and NGOs hailed the Helping Hands charity event, initiated by Young minds of the society in the region igniting humanity, Helping Hand trying to...

2 Oct 2012 - 5:31am | Pankaj Sharma
A new executive Committee for NEMA (Nagaon Electornic Media Association) was formed at a meeting at the Nagaon Press Club on Monday. The meeting was chaired by Nagaon Press Club president Sri Kanak...