The United Liberation Front of Asom on threatens to launch a massive attack on security forces along with a section of police and intellectuals waging war against them. In an e-mail statement, ULFA Commander in Chief Paresh Baruah on Tuesday said they would also target national celebrations like Independence Day and Republic Day. Baruah said his outfit will not target the public places and that people in general will punish any ULFA cadre responsible for any explosion in public place. He further warns of dire consequences against the intellectuals and villagers acting as police informers.

Baruah's statement comes up at at a time when government is trying to hold talk with the ULFA top guns in its captivity.

11 Dec 2008 - 7:42pm | editor
Noted litterateur Indira Goswami has been conferred with the Netherlands' prestigious Principal Prince Claus Award for her work in Indian culture and its development, but the writer is all the more... 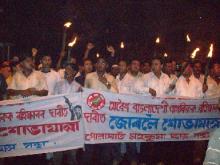 Protest in Golaghat against illegal immigrants

Erosion Threat to the people of Namti