The sight of a stereotype Muslim with a trademark beard and round cap evokes mixed feelings in a crowded area in many parts of the world, not to speak of India. The Akbar as portrayed in ‘Amar Akbar Anthony’ of the 1970s has well been reduced to ‘Amar Osama Anthony’ down the years. Apart from the growing fundamentalist forces in Afghanistan, Pakistan and Middle-East, the diplomatic, conniving West; their politics, the corporate and media have fired a phobia of Islam. The ‘demonization’ of Islam is complete. But, a greater terror is crippling the lives of innocent civilians in India. This is less talked about, or infact never taken up or highlighted seriously. This is another form of terror which the masses of India has been afflicted with of and on. The ‘Khaki terror’ ; the terrorism unleashed by the police in India.

The case of Ruchika Girhotra is only a tip of the iceberg. This case will always be referred as a yardstick of the terrorism resorted to by the police in India. The case of molestation of a 14 year old girl by a senior Haryana police officer, SPS Rathore has raised serious questions as to the integrity of the institution of ‘Police’ in the country. DIG Rathore not only harassed the family of the deceased Ruchika but also framed false charges of murder and theft against the victim’s father and brother when an FIR was lodged against him 19 years back. There are numerous cases all over the country where the police has been levelling false charges according to their whims, either to settle personal scores, or under the direction of powerful lobbies or as ‘disguised’ extortion. Ruchika and her family’s case should stir the country and make all citizens of India sit up and raise a voice against the rotten police department. In India, people see police as government sanctioned goons certified by a uniform characterized by a abominably dull and depressing colour. It is high time the common people are empowered to counter the misuse of constitutional privileges of the police. Has the Constitution of India equipped the citizens of the country to shield themselves against misuse of powers by recruits in the police ‘service’?

dismissed or removed or reduced in rank except after an enquiry in which he has been informed of the charges against him and given a reasonable opportunity of being heard in respect of the charges. The icing on this cake (meant for police alike) is layered with provision (b) in Article 311 (2) where the authority empowered to dismiss or remove a person or to reduce him in rank is satisfied that for some reason, to be recorded by that authority in writing, it is not reasonably practicable to hold such enquiry. This is the clause which was best misused by DIG Rathode and by hundreds of his tribe of policemen. The police officer was able to keep those at ministerial berths in good humour and thereby milch favours from the ‘holy cows’, duely termed by the Minister of State for External Affairs Shashi Tharoor. Clause (2) of Article 311 is contradictory to the spirit of Article 14 in the Constitution which promises the citizens of the country “Equality before law”. If civilians can be arrested at the drop of a hat, and in numerous cases which are based on false allegations, why are police officials elusive? It seems that if policemen are public ‘servants’, the public are slaves to these government servants. It is high time serious changes are made to Article 311 and clause (2) (b) repealed to uphold the ideals of Justice and Equality as enshrined in the Preamble of the Constitution.

Permalink Submitted by SARADA on Sat, 23/01/2010 - 22:38
Yes, rightly said Pallavi, it is because of the terror of these Khaki clad men in polic stations that many still have to think twice before 'visiting' a police station or even asking for help. However all of these men are not bad, there are some who do justice to the uniform.

Permalink Submitted by milk talukdar on Tue, 26/01/2010 - 11:24
Personally i am against of any kind of killings. In reality more and more innocent people has been killed by security forces than that of ULFA and NDFB in assam. Need to come out to street against the khakies, they are paid by us. They are not paid for harm us, rather protect us.

3 Feb 2017 - 10:09am | AT News
The enforcement directorate has attached a huge property worth Rs 100 crore belonging to Matang Sinh and Manorsnjana Sinh in New Delhi in connection with the sharadha chit fund scam. The two flats... 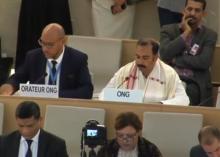 Migration and human rights issues of the NE raised in UN