Two ULFA linkmen were nabbed by Army with arms and explosives in Goalpara district on Saturday. Identified as Ambas Ali and Dabanam Changma alias Ali Garo they were involved in the July 30 bomb blast in Goalpara. Acting on a tip off, jawans of 9 Sikhli regiment of the Army''s red Horns Division apprehended the two at Rakhshashini Pahartuli village under Mornoi police station.

Altogether 68 detonators, some gelatin sticks and explosives, 250 metres electric wire and a mobile hand set were recovered from them. At least five CRPF personnel were killed and 44 others injured when militants triggered a powerful IED blast at Bhalukbudi in the district on July 30.

Culling in progress in Dhubri and Kokrajhar

4 Feb 2008 - 2:02pm | editor
For the second day, the rapid response team are carrying out poultry culling in some parts of Kokrajhar and Dhubri district. The culling is going on in an area of 5 kilometer having as many as 90,000...

20 Mar 2008 - 3:51pm | editor
The Gauhati High Court has ordered suspension three top ranked police officers for probing into the teacher recruitment scam with out arresting two kingpins involved in it.According to information, a... 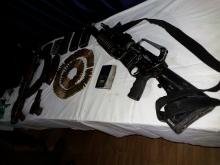 29 Aug 2015 - 9:48am | Hantigiri Narzary
Security forces claimed to have killed two hardcore cadre of NDFB-S in an encounter at Auxiguri-Auguri area under Auguri PS in Chirang district early this morning. A joint team of security forces...