People of Kalaigaon LAC have expressed strong resentment at the failure of the government to complete the appoint process of the remaining 28 nos of posts of AW and AH under Kalaigaon Revenue Circle (Darrang district part),which had been withheld at the time of declaration of selection list.It needs mention that there had been a tug of war between the public members and CDP office during the time of interview resulting withheld of 28 nos of such posts in Kalaigaon Revenue Circle (non BTAD part).Government of Assam appointed a state level enquiry committee to settle the matter.

The DC was also directed to arrange re-interview against 4 posts and enquiry against 24 posts. Accordingly, the Deputy Commissioner, Darrang by an order directed the ADC, Darrang and Circle Officer,Kalaigaon Revenue Circle to submit report in August 2010. According to the information received from the DC Office, Mangaldai, the Circle Officer,Kalaigaon submitted the final list against 28 nos of withheld vacant posts in the month of October 2010.But the whole process of appointment remained under the cover of darkness for nearly three months.Candidates,their guardians and public as well have expressed their fear of loosing both the money and appointment letters because of the coming assembly election.The whole process of appointment would be halted with the declaration of the election notification.People of Kalaigaon have urged government of Assam to complete the appointment process before the declaration of the assembly election, 2011.

On defining the Assamese

15 Aug 2009 - 10:43am | pallavibarua
A friend of mine often relates to me of the surprising looks she invites whenever she speaks in Assamese in places other than North-East India. She surmises it might be because of her strong... 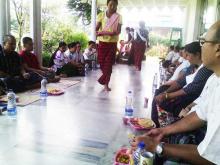 30 Apr 2020 - 6:36am | Shajid Khan
UDALGURI: "The exams at the comfort of home– in loose-fitting clothing and with a glass of water handy " yes this has been the experience of the students of a private sector school in Baksa...