The entire Dhubri district is reeling under acute power cuts problem for the last few months and sometime the district headquarter, Dhubri have to remain without electricity for 16 to 18 hours in a day. These long power cuts make the life of the people miserable. It has seriously affected the academic environments of the district. The main sufferer is the small businessman like computer centers, internet café, DTP houses and small offset press owners who solely depend on the power supply of ASEB.

From a reliable source, it came to know that the reason for such long power cut is due to the non maintenance of the various transformers and for which some of these transformers are not able to bear the load. People even alleged that the some employees of the electricity department sell the coolant of those transformers to the open market. When some correspondents contracted the SDO (Electricity), Dhubri over his mobile phone to know the actual causes behind such long hours of load shedding, the SDO was found to be in long leave. Then Mr. Das, the in-charge officer was contacted but he could not able to give the the exact reasons for long hours of power cut. He, however, said that Dhubri town requires about 7 to 7.5 megawatts of electricity daily on an average and they are getting only 6 megawatts.

It is mentionable here that almost all the high officials of the town such as DC and SP are using generator sets in their residences for 24-hours service. People of the town feel that those officials are not trying to feel their problems and spending lots of the tax payers’ money for their own comfort. 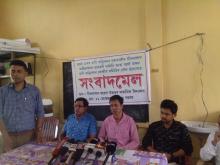 13 Sep 2018 - 9:03pm | Nikhil Mundra
Hojai:-The 15th Midterm State Level Convention of Sadou Asom Kabi Sanmilan is going to be held on September 29 to October 2 with an extensive 4 days programme at Nilbagan under Hojai district. As per...

23 Oct 2007 - 5:32am | Dibya J Borthakur
In support of its demand for inclusion of the Tiwa Autonomous areas in the Sixth Schedule of the Constitution and in protest against the State Government's move to hold panchayat elections in the...