Abductors on Thursday freed Joy Narayan Bansal, a businessman from Tinsukia district in Assam was abducted by four persons from Doom Dooma area of the district on June 17 and taken to Arunachal Pradesh. A joint police team of Arunachal Pradesh and Assam rescued Bansal from Chongkhan area of Lohit district. 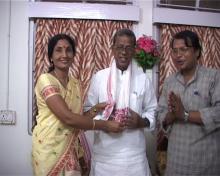 Bhumidhar Barman turns 80...the oldest minister in the cabinet.

13 Oct 2010 - 4:15pm | Peter Alex Todd
Bhumidhar Barman was born in 1931, passed his matriculation from Tihu High School in 1951 and his batch was the last batch to pass from Calcutta University. At present Dr Barman, is the most aged...

15 Dec 2008 - 3:43am | editor
CPM general secretary Prakash Karat says the country needs a third front for a better future. Addressing a mammoth rally in Guwahati on Sunday the partyÃ¢â‚¬â„¢s he said need of the hour is a...

22 Apr 2018 - 2:23pm | AT News
ITANAGAR: Three army jawans died and four others sustained serious injury when the vehicle on which they were travelling met with a mishap in Arunachal Pradesh on Sunday. The mishap took place in...