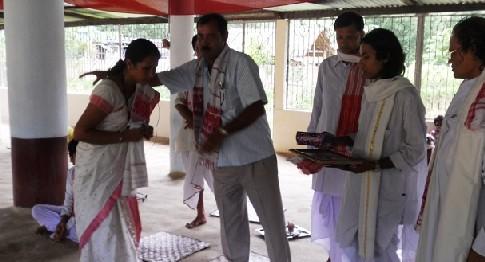 Sri Dutta Dev Goswami, the Satradhikar of Bhogpur Satra, Majuli and also the working President of Assam Satra Mahasabha, today felicitated Ms. Bobita Bora, Dist. Correspondent of Dainik Janambhumi, at a function held at Kakoty Gaon Namghar, Betioni Golaghat. Bora was felicitated for her news article published on 25th May about an octogenarian couple who donated their lifelong savings toward the construction of a Namghar Gate in memory of their deceased parents. Speaking on the occasion, the Satradhikar said that motivate people to be religiously concerned and inspiring enough to make people give due importance to religion in their life.

23 Jul 2016 - 6:31pm | Shajid Khan
Up in arms with the poor road condition of the road connecting Tangla-Muradew the villagers of Jalah village of Udalguri district chose a unique and creative method of exposing the failure of...

3 Feb 2014 - 5:16pm | AT News
Several people have been injured when policemen sprang upon a crowd of KMSS protesters in Titabor on Monday.The incident took place in the afternoon when thousands of people were participating at a...

Shoot out in Guwahati

16 Mar 2014 - 7:36pm | AT News
Two persons sustained injury at an incident of shoot in Guwahati on Sunday.It took place at Kundil Nagar Beltola when a security guard of a coal trader shot at two local youths in front of Prabhat...