Realizing the sufferings of the common people of the district and to respond appeals from several organizations, the Indigenous People Forum (IPF) called off the 100 hours N C Hills (Dima Hasao) Bandh from 6 AM of 10th August, 2011 (Wednesday) next.

3 Aug 2015 - 7:10am | AT News
Universities, schools and colleges will have to bear the brunt if ragging incidents are allowed to take place. In a recent letter, higher education director P. Jidung asked all the authorities of the... 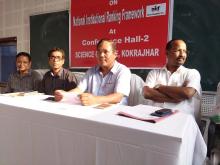 27 Nov 2017 - 4:26pm | AT Kokrajhar Bureau
BTC Bengali Youth Student’s Federation staged a 2.30 hour sit-in-dharna in front of DC office in Kokrajhar on Monday demanding steps yo stop of excess on the Hindu Bengali community in the...