Tension is simmering in Ghagorpar near Gerukamukh following an incident of police firing on Friday.

Police men on duty at Ghagorpar resorted to blank firing when they tried to disperse the people who blocked oil tankers bound for Gerukamukh.

Police further arrested aleast 14 people when they prevented the oil tankers to leave for the NHPC project site in the evening.

15 May 2008 - 7:04pm | editor
The Northeast Frontier Railway has been cancelled all trains in North Cachar hills distict as violence again erupts on Thursday. The crucial decision was taken following a series of attacks on...

14 May 2014 - 11:30am | Hantigiri Narzary
Independent candidate backed by ABSU and its allied organizations like BPPF, UDPF, PJACBM and NDFB (P) Urkhao Gwra  Brahma of Kokrajhar Lok Sabha  has alleged that there is thin ... 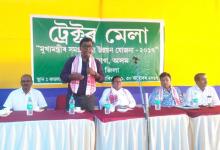