Three members of a family were killed in a landslide following by incessant rains in Guwahati on Wednesday.

The incident took place at Dhirenpara area where three members of a family, including two minor girls were buried alive. The deceased were identified as Masfida Begum (40) and her two daughters Jesmin (14) and Mainu (7).

According to police, the incident took place in the when mud fell down from the adjacent hills and pressed a portion of the house against the ground, where the three were sleeping. The bodies have been recovered. 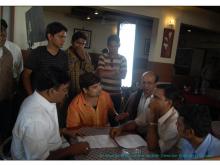 5 Aug 2009 - 1:57pm | Pranjal Saikia
With contemporary audiences entertainment industry is always in creating innovative resources of creativeness day by day, minute by minute to make their work more admired and acquire lots of...

23 Jan 2018 - 1:29pm | AT News
GUWAHATI: Security forces are fanning in the nook and corner of the state to counter the ULFA(I) and NDFB(S) rebels who are believed to have been preparing to strike in the run up to the Republic Day...

10 Jan 2009 - 10:29pm | editor
A day after a powerful explosion rocked the north eastern city of Guwahati, the United Liberation Front of Asom (ULFA) has alleged that Assam DGP G M Srivastava and IGP Khagen Sarma have been...