Flare up results in massive exodus

The ethnic flare up forces thousands of people in Kokrajhar, Chirang and Dhubri to flee to north Bengal. These people, mostly, taking shelter in Alipurduar. But road transport in the West Bengal border district was severally hit near Kumargram area in Jalpaiguri district after borders areas were sealed.

A 12-year-old girl was admitted to the Alipurduar Hospital after being shot at by the miscreants on Wednesday.

26 Feb 2014 - 10:17pm | AT News
Tension seems to have escalated in Lakhapani area in Tinsukia district after five policemen sustained injury in mob attack.Police resorted to blank fire to disperse an irate mob who pelted stones at...

6 Sep 2015 - 8:39pm | AT News
Flood scene marginally improves on Sunday. But it might resume the worse turn if rains return in the catchment areas of Arunachal Pradesh. The water levels of the Brahmaputra stopped surging during... 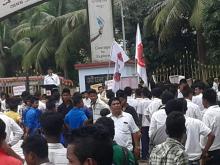 13 Jul 2016 - 3:46pm | SK Hasan
The protest over the oilfield auctioning move gathers momentum when AASU activists in large number staged mass demonstration in Nazira on Wednesday asking the government not to proceed. Led by AASU...