Who will bell the media?

Two teenage boys from Gurgaon aged 14 years hit the headlines in every Indian TV channels and had their names mentioned in all the newspapers. They were the so called new poster boys. The occasion, however, was not something which would have called for a celebration; it was one of an unprecedented crime, a crime that took place in an alma mater on 11th December 2007. Unaware of the repercussion of their action, the two boys in retaliation shot down one of their classmate who apparently used to bully them. The media in their zealousness and search for attention grabbing headline and anything that makes news, went overboard in this case. Even before the crime of these two boys have been proved and the psychological motive assuaged; the media announced their verdict and branded these two boys as criminals in the eyes of all.

This incident led me to a lot of introspection and unanswered questions; what ails the growing children of India? Who is to blame - school administration, parenting skills, our growing societies and the rise in disposable income? Or the insensitive media which ensured, while reporting the incident, the gross violation of Juvenile Justice (Care and Protection of Children) Act 2000 which clearly states that:

No report in any newspaper, magazine, newssheet or visual medias of any inquiry regarding a juvenile in conflict with the law under this Act shall disclose the name, address or school or any other a particulars calculated to lead to the identification of the juvenile, nor shall any picture of any such juvenile be published - (Article 13, chapter 2)

But do the media really bother or care, as long as their newspapers are being sold off and the news ratings are on the increase? I wonder if the mighty ones’ in the position of power in the media ever bat their eyelids while condemning the two boys as habitual offenders and killers. Did they at all think before putting headlines such as –“Gurgaon shooting: 'Killer' boy's father surrenders”, “Family deserts Gurgaon ‘killer’ child”.

The media should think twice and be more responsible before sensationalizing crimes or condemning the perpetrators of it. They should keep it in the back of their mind that there are sections in this society, who follow their daily piece of news, being fed by scores of TV channels, newspapers, radio, et all, with a fervor similar to that of religion. And hold everything that the media reports as truth.

From the status of a watchdog and performing the stellar role of a catalyst, the media fraternity has become operators of an un-ethical corporation, whose only goal is to increase TRPs, churn advertisement revenues and ensure a rise in the monthly bank balances. There has been innumerable incident, where some of the media, inspite of human rights agencies crying hoarse, endless appeal from NGOs and activists, have gone ahead and revealed the names and identities of HIV positive persons and victims of heinous crimes such as – rape, human trafficking, dowry and sexual abuse.

Let us, however, not forget the immense power this medium possesses. Sensitive, well researched and conscientious reporting can make a definite difference to the quality of innumerable lives. Without doubt, it can enable one to take a critical look at situations and stances, and thus help in protecting those who are vulnerable and generate empathy for those affected.

So, what went wrong with this powerful medium which resolutely fought for the real truth? Brought into light issues related to human security, booked the perpetrators of crime of all sorts and order, kept whistle blowers on their toes, investigated the corrupt, created role models , celebrated human spirit and recreated magic. Millions of readers and television viewers depend on the media to shape their views. Lets us take a minute from our busy lives and think about it.

Permalink Submitted by Kamala on Wed, 19/12/2007 - 02:47
This article brings to the light , the present media scenario.It is indeed shameful, that the status of the media has come down to this level.

18 Sep 2014 - 11:33am | AT News
Shankar Baruah’s “unfortunate death” is a set back for CBI probe into the Saradha scam where the former DGP was an accused. Barua, who shot himself to death on Wednesday, was an important part of the... 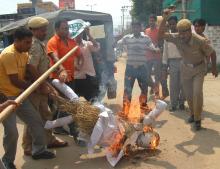 6 Jun 2008 - 12:22am | editor
Activists of Asom Jatiyatabadi Yuva Chatra Parishad (AJYCP) burn the effigy of Union Petroleum Minister Murli Deora in protests against the price hike in petrol, diesel, and LPG cylinder in the...

26 Jun 2013 - 2:00pm | AT News
ULFA top leader Anup Chetia will be back to his home by July 15. Talking to Assam Times, home ministry sources said in Delhi that diplomatic efforts are in final stage to extradiate the ULFA top...
Follow @Assam Times