The third special train to Bangalore is likely to leave Guwahati on Sep 20 to facilitate the return of those who had fled Bangalore and some other south Indian cities last month after rumours of attacks on people from the northeast. The state government will pay the cost of train tickets for those who are willing to return. According to the Northeast Frontier Railway, the notification is expected in a day or two.

The Assam government had also directed the Transport Secretary to issue instructions to all the Deputy Commissioners in the state to register the details of the people who inquire about the special train Sep 20 through the helpline created by the state government. 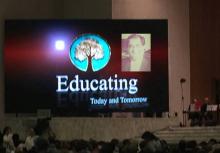 19 Nov 2015 - 7:20pm | CM Paul
A Vice-Chancellor from northeast India university was the only Indian to present a paper at the Vatican organized World Congress on Education today, 19th November. Dr Stephen Mavely the VC of Assam...

7 Mar 2016 - 9:46pm | Hantigiri Narzary
After the announcement of schedule for General Election to Assam  Assembly, the DC and DEO, Chirang Rupak Kumar Mazumdar, held a meeting with the representatives of all political parties for...