Over 500 people have been undergoing critical treatment at different hospitals in Guwahati after consuming food served as Prasad on Friday’s Saraswati Puja in Dimoria area of Kamrup. This has forced the Kamrup metro district administration to order an inquiry into the incident.

GMCH alone has 140 children from three schools in Durung, Koraiguri who were rushed to it following complaints of stomach pain and vomiting. They fell ill after they consumed grams and khichri. On Saturday morning, the patients were admitted to the 30-bed Khetri Hospital andSonapur Primary Health Centre from where a section of children in critical condition were referred to Gauhati Medical College and Hospital (GMCH).

GMCH authorities told assamtimes that, these people, mostly children fell ill after consuming grams and khichri. GMCH has also set up as relief camp at Khetri with five doctors. The patients complained of vomiting, fever, dizziness, diarrhoea and abdominal pain. Down Town Hospital has 35 patients apart from 30 others at Hayat Hospital and some others at the MMC Hospital.

Ambulance have been called in from Morigaon, Guwahati and Jagiroad. Moreover, five buses have been engaged to bring patients to the hospital. 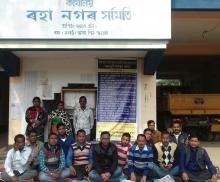 16 Sep 2011 - 8:56pm | Mowsam Hazarika
DR. Pradip Kumar Sarmah, the founder of Rickshaw bank was today named as a laureate of The Tech Awards 2011, one of 15 global innovators recognized each year for applying technology to benefit...