The bandh was called by the Coordination Committee of Non Rabhas from Tuesday morning. But only to be marred by a string of sporadic incidents of violence. Altogether 5 people including 2 policemen were injured when they clashed with a group of bandh supporters at Khorboja. Three bandh supporters were injured when police resorted to lathi charge and fired rubber bullets to quell the irate crowd.

20 May 2015 - 8:16am | AT News
Union minister for steel and mining Narendra Singh Tomar has announced a steel depot in Silchar. Tomar who was on a visit to Guwahati on Tuesday set up a 3 member panel headed by MGKV Bhanu to...

20 Jun 2015 - 3:39pm | Jintul Talukdar
Flood situation remains unchanged in Barpeta district on Sunday where over 15,000 people have been reeling under the surging waters.The worst-hit district has 13,000 marooned people to be followed by... 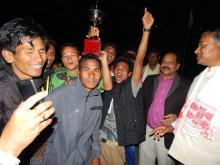