A London Bihu for all generations

“IT WAS ALL great fun and I am eagerly waiting for next year's Bihu celebrations to have more fun, see friends and win more medals.”

Those were the words of eight-year-old Juhaim Rasul Choudhury. He came second in the children’s ‘Olympic Games’ at this year’s London Bihu, which was held on Sunday 5 May at Campion School in Hornchurch.

He added: “I also liked watching all the performances on stage especially when all of us danced together on the stage. I loved the food – especially the yummy jelly.”

Juhaim summed up how many felt about the twenty-sixth consecutive celebration of Bihu in London: good entertainment, good company and good food.

Geeta Borooah, the President of the London Bihu Committee, said this year people came from all four corners of Great Britain to celebrate Rongali Bihu.

“What impressed me was how we had many walks of life represented – from first generation Assamese, to Assamese descents, those who married into our culture and people who are just interested in our traditions,” explained Mrs Borooah. “It appeared to me that there was a lot of fun, chat and enjoyment to be had by all.”

For him, the Bihu Bhoj was one of the main highlights. Mr Borkakoti said: “I always look forward to the proper Assamese snacks which are made by the talented aunties in the traditional way – and to the main meal that the Food Secretary Sanjay Sikdar made sure was of the highest standard.” 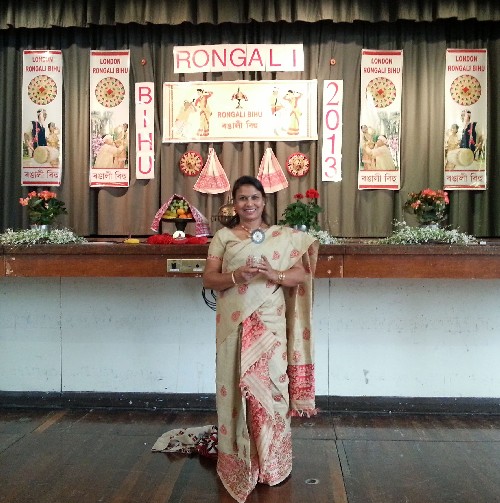 Meenakhi Borooah, the Treasurer of the London Bihu Committee, commented that it was “great to see so many familiar and new faces”, and in addition, felt the cultural show was a prominent feature of this year’s London Bihu.

“It seemed that the line up - which culminated in Meera Das Saharia’s songs - drew in everyone's attention,” she said.

In fact, the Vice-President of the London Bihu Committee Dr Khogeswar Lahon noted: “The performance of the guest artist was very good, so much so, that it attracted lady dancers to the stage.”

Mrs Das Saharia, who became an approved All India Radio singer in 1975, interpreted Bihu songs in such a way that, not only did it see guests spontaneously take to the dance floor, but lead to calls for encore. 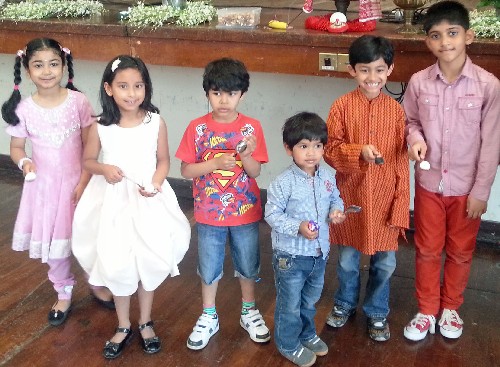 Juhaim Rasul Choudhury, 8, (second in from right) with some of the other children who participated in Bihu Olympics

For Rishi Kakati, the Committee’s General Secretary, it was the start of the cultural show that was one of the most memorable moments for him:

“For this year’s Husori, we surprised the audience by coming through the crowd to get the party started.”

Mr Kakati continued: “London Bihu is more than just a big old party to me. It represents an important link for me - and people of my generation, born and brought up in the UK - to the culture of our parents and our cultural roots back in Assam.

“I thought that London's Rongali Bihu 2013, reflected those elements perfectly.”

Many commented on how it felt as if the proportion of young people had increased – be it second generation or the young first generation. Committee member Dr Neera Borkakoti said: “There was a visible increase in the attendance of families with young children, which is a sure sign of growth of young Assamese Diaspora in the UK.”

It was the Vice-President of the Committee Dr Khogeswar Lahon who captured what made this year’s Bihu unique from the 25 that went before it:

“The purpose of the London Bihu to me is to promote and perpetuate our Assamese Culture abroad.

“This year, comparatively more youngsters turning up than at previous events and to me this shows that Bihu is performing its purpose.”

And in the words of 8-year-old Juhaim Rasul Choudhury, many are “eagerly waiting for next year's Bihu celebrations to have more fun, see friends and win more medals.”

17 Sep 2015 - 10:05am | AT News
An unidentified object hovering around the sky in upper Assam pulled no less spell of curiosity among lakhs of people on Wednesday evening.Much to the utter surprise and curiosity, the comet like...

Girl gangs with a noble cause

15 Mar 2009 - 6:34pm | editor
There is no power like girl power. This can’t ring more true when it comes to empowering young adolescent girls in rural India.What began as self help girl group, a unique concept taken up by...