A rescued rhino calf, Purabi, under care at Centre for Wildlife Rehabilitation and Conservation (CWRC) was moved to Manas National Park today, to join an orphaned rhino calf being hand-reared there. This is being done to increase the rehabilitation prospects of the latter calf which has been deprived of company of its kind since its mother was poached early this year.

“We have been rescuing rhino calves at Kaziranga in various circumstances and most of them are now successfully hand raised at CWRC. At due course of time all these calves go back to the wilderness again,” said NK Vasu, Chief Conservator of Forest and Director, Kaziranga National Park.

Purabi was separated from her mother during the floods in 2012 in Kaziranga, a UNESCO World Heritage Site. She was rescued by Assam Forest Department and local people near Haldibari area and admitted to CWRC. Since then she has been under care at CWRC located near Kaziranga National Park of Assam, India. CWRC was established in 2002 in a joint initiative of Assam Forest Department and WTI-IFAW partnership.

The other calf, named Dwimalu, a male, was just a few weeks old when rescued. The mother was one of the wild rhinos translocated under the government’s Indian Rhino Vision 2020. Since April, he is being hand-reared by the Forest Department authorities assisted by IFAW-WTI in Manas.

At Manas, both these calves will be hand-reared together for a couple of years and eventually released there.

“We welcome this move of shifting another rhino calf from CWRC to Manas. We are committed to restore Manas’s glory with such initiatives,” said Anindya Swargiary, Field Director of Manas Tiger Reserve.

“In wildlife rehabilitation, it is always advisable to hand-raise orphan calves together in the initial stages of their rehabilitation procedures to avoid the stress level of the calves,” explained Dr Rathin Barman, Deputy Director, WTI and in-charge of CWRC, Kaziranga, on the reason for the move of Purabi from CWRC.

IFAW-WTI has been assisting the Forest Department and Bodoland Territorial Council authorities to repopulate Manas with rhinos as part of their ‘Bringing Back Manas’ (to its former glory) initiative. The rhino reintroduction in Manas was kickstarted with the move of Mainao, a female rhino rescued from the floods and rehabilitated here. She was moved to Manas in 2006 making her the first rhino to step foot in this UNESCO World Heritage Site since its entire population was wiped out during the years civil unrest that ended in early 2000s. 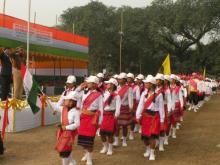 20 Jul 2009 - 8:11am | Nanda Kirati Dewan
Arunachal citizens Right (ACR) have raised concern about the rapid pace at which the state government has signed Memoranda of Agreement (MoAs) with hydro-power companies in recent times. As per an...

Fresh shoot out at Bagsa: 3 injured