Polarization of political forces in offing

It’s true there are no permanent friends and foes in the politics. Onetime foes are sometimes very much helpful to keep one’s interest fulfilled, of course on their own terms. For a long time in Assam, there were speculations about ruling Congress Party joining hands with All India United Democratic Front (AIUDF). The AIUDF chief, Badaruddin Ajmal had approached Congress Party chairperson, Sonia Gandhi and other party leaders to have an alliance in the mutual interest. But having champion’s position in the Assembly polls by making win thrice, the Assam chief minister, Tarun Gogoi was not in favor of having any link as he was not in good terms with AIUDF chief, Ajmal.

Now, since the Bharatiya Janata Party (BJP) has declared to field Gujarat chief minister, Narendra Modi, as party’s prime ministerial candidate, the situation have changed. The scenario in the state of Assam has changed due to division among the masses leading to raising the issues of various grievances and failure of the ruling party to resolve them. The polarization of Hindu and tribal votes in the state is the reason behind the strategy for having a new look. Therefore, the Congress high command is trying to have an alliance with AIUDF before the Lok Sabha polls of 2014. Majority in the party wishes to have an alliance to remain in power at any cost. But the state chief minister, who is very much loyal to the high command, so far has not changed his mind. Now, under the high command’s pressure he is likely to change his mind so that he continues to remain in the ‘good book’ of the party chief.

On the National level, whereas the Janata Dal United (JDU) has severed its ties with the National Democratic Alliance (NDA) and the reports have come that Telugu Desam has decided to join NDA. More parties are likely to join either UPA or NDA camps shortly, as the attempts for the formation of Third front is not feasible.

According to available reports, out of 14 Lok Sabha seats from the Assam state, the Congress Party desires to give two seats to the AIUDF, which is not acceptable to the later and the differences continue. Several Congress party leaders from the state have been summoned by the party high command for discussions before any decision is taken and it is expected that an agreement would be reached, as there are no permanent friends and foes in the political arena.

28 Sep 2010 - 1:37am | editor
At least 175 students fell ill after they consumed meal served in school in Dibrugarh district on Monday. The incident took place at No 3 Line LP School in Borbaruah Tea Estate at around 1PM after... 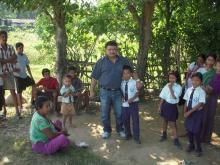 25 Nov 2012 - 8:54pm | Manoj Kumar Das
Partition brings pain and trauma. If it is international like the partition of India, then it’s tragic yet unavoidable. But when that happens within the country it’s regrettable. I have no idea about...
Follow @Assam Times