The All Assam Students Union has called it a warning call for the people power when the Gauhati High delivered a landmark judgment on illegal Bangladeshi migrants.

Talking to reporters on Wednesday, AASU leaders said it’s a shameful chapter for both Delhi and Dispur while the court itself virtually hold the State Government and the Centre responsible “the external aggression and internal disturbance brought about by influx from Bangladesh.”

The AASU leaders maintained that going by the recent judgment on illegal migrants, it has been established that what thy have been doing over the years are right against the illegal Bangladeshi migrants and government inaction to identify and deport them.

They lambasted Congress, AGP, BJP and AUDF for their lack of interest to detect and deport the illegal migrants who have infiltrated from across the border. “The infiltrators are their traditional vote bank and that’s why they fear a dent in it,” said Dr Samujjal Bhattacharya, AASU adviser.

AASU president Shankar Prasad Ray ridiculed the government saying illegal migrants could operate in Assam, may be a poll candidate and what not. “The Union and State Governments have yet to act in a manner to stop infiltration from across the border,” he said and urged both the governments to implement the Assam Accord in letter and spirit.

AASU general secretary, Tapan Kumar Gogoi said it was only in a place like Assam that a foreign national could contest elections, all because of the failure of the government and the political parties.

The students leader flayed Chief Minister Tarun Gogoi and Prime Minister Manmohan Singh for their studied silence on an issue that was crucial to the State as well as to the country.

Court verdict: It may be noted that in a recent landmark verdict, the Gauhati High Court has observed that an infiltrator with a Pakistani passport had contested the Assam Assembly polls in 1996.

Justice B K Sharma, in a recent judgment ordering the deportation of 50 Bangladeshis, mentioned that one of the petitioners was an infiltrator with a Pakistani passport and had contested the 1996 assembly elections in Assam from Jamunamukh constituency. Then judge maintained,”the petitioner was in possession of a passport issued by the Pakistan government on the strength of which he traveled to Dhaka from where he sneaked into Assam.”

He further observed that if the phenomenon of cancerous growth of Bangladeshis continues, the day is not far off when the indigenous people of Assam, both Hindus and Muslims and other religious groups, will be reduced to minorities in its own land and the Bangladeshis who are freely moving around the states will intrude upon the corridors of power.

The Court, however, lambasted the government and its police administration along with parties which make it possible for illegal migrants to have easy access to vital documents such as ration card, voters' list and even passport.

Permalink Submitted by robin on Mon, 15/12/2008 - 03:47
its shame that we been Indian are showing such irresponsibility to one part of country as if we have already given up our hope and have started believing that assam is no longer going to be part of India , shameless Politicians wake up its your motherland ,just for the sake of ruling the country dont ignore the critical situation in assam and other parts of country,where are you going to rule when the complete country goes in the hand of foreigners ,still there is time get up SAVE your country show the terrorist country that however trys to look at INDIA with wrong intentions , will have to do at his own risk.Show those BAstards that we all are one.

10 Feb 2014 - 1:48pm | AT News
The master mind of the defeat of the Opposition consensus candidate Haidor Hussain was none but Badaruddin Ajmal. The AIUDF president had a huge deal with Rahul Gandhi to ensure victory of the ruling...

18 Jun 2013 - 9:43am | AT News
Preparations are complete to ensure smooth conduct of the Guwahati Municipal Corporation (GMC) election on Wednesday.There will be 15 zonal magistrates and 72 sector officers monitoring the situation... 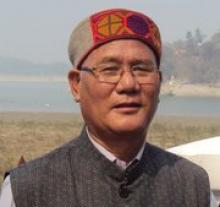 30 Sep 2016 - 10:19pm | AT News
Prominent Assamese writer of Arunachal Pradesh, Yeshe Dorjee Thongchi will grace the next ‘Guest of the Month’ program of Guwahati Press Club (GPC) on 4 October (Tuesday). The interactive session...