17 Jun 2010 - 6:16pm | editor
An uneasy situation prevails in Guwahati following the murder of a youth. Mihir Deb, a security guard was killed by a gang of dacoits as he was manning a store at Beltola survey area on Wednesday...

16 May 2013 - 9:14am | AT News
A beefed up security in Guwahati is of no use when bombs are found in the hear of the city.Police recovered an IED at Lalmati area hours after Prime Minister Dr Manmohan Singh and President Pranab... 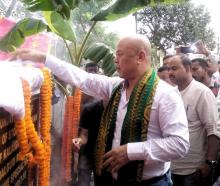