26 Apr 2014 - 7:57pm | AT News
The Election Commission will conduct repolling in Bornijora polling booth after it confirmed vote rigging on Thursday.Official sources in Guwahati said that repolling would take place from 7 in the...

4 Mar 2014 - 3:58pm | AT News
Jintul Talukdar from BhawanipurChief Minister Tarun Gogoi claimed on Tuesday that Congress would be able to put up a commendable performance in the upcoming Lok Sabha polls.Talking to reporters at... 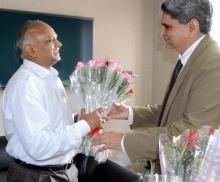