28 Jul 2015 - 7:25pm | AT News
North east insurgents have been resorting to illicit trade in drugs and fake currency to make money.This was what Mukul Sahay said when the additional DGP was talking to reporters in Guwahati in the...

19 May 2009 - 1:23pm | editor
After a brief lull, suspected Naga rebels gunned gunned down four Dimasa persons in the trouble torn North Cachar hills district on Tuesday. According to information, the incident took place at the... 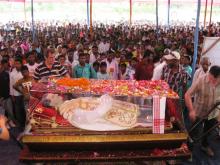