A women was killed when police fired to disperse a group of people who turned violent after a local villager tried to kill his son in the outskirt of Guwahati on Monday.

The incident took place at Changsari in the afternoon when a local villager was trying to kill his 2 year old son following a clash with his wife.

Local residents in large number turned violent and attacked the person forcing police to step in.

A section of the local residents allegedly pelted stones at the policemen that turned the situation worse.

Policemen deployed had no option but to resort to firing where five persons sustained injury.

One of the woman succumbed to her injuries at the Guwahati Medical College Hospital.

Others along with the two year old have been battling for life at the GMCH. The situation is still tense.

22 Jun 2015 - 11:15am | AT News
After a brief respite the flood situation again deteriorated following further rainfall in Arunachal Pradesh on Monday. The water levels of the Brahmaputra and its tributaries started rising in...

Polling ends, eyes fixed on May 16

12 Apr 2014 - 7:09pm | AT News
Voting in Diphu, Silchar and Karimganj ended peacefully. Now the eyes are fixed on May 16 when the counting of votes would take place from 8 in the morning.Barring a few complaints of EVM malfunction... 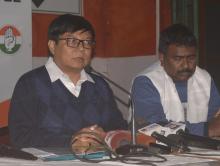 30 Dec 2016 - 12:00am | Syed Miraz Ahmed
Debabrata Saikia, the Congress Leader of Opposition called upon  Union Minister for Culture Mahesh Sharma. In a letter Saikia drew the attention of Sharma on a recent training session organized...